To really study the production of veal, we are taking you deep into the French country- side, to Lot, a department east of the Périgord, and the hamlet of Bétaille (which loosely translates, quite cannily, as a muddle). This is where Jacques Laborie lives, and he is more than happy to be our guide.
Jacques grew up surrounded by calves and became a trader just like his father.
The system is simple: he buys live calves from the farmers in the departments Lot and Corrèze, and sends them to the abattoir in Saint-Céré four times a week. He supplies the carcasses to one client, and one client only: Deplanche-Laubery in Rungis. Jacques even has his own trademark and logo for the meat he produces: Le Veau Laborie.
His office is littered with papers and a variety of telephones are constantly ringing; not surprising considering the area he is in charge of comprises hundreds of farmers who specialise in the veau sous la mère production system. Jacques knows all of them personally and pays regular visits in search of the best quality calves: animals with a classification of at least U, often E, and with a fat class of 2 or 3. “Veal is the caviar of meat”, comments Jacques, “and the farmer is the deciding factor when it comes to quality.” He carries on explaining all about his business whilst we enjoy a cup of coffee. He tells us how the farmers he works with are artisans; that they still use traditional methods from the middle of the twentieth century, and that most of them have always combined calf rearing with growing tobacco. Since Europe stopped the subsidies for tobacco cultivation, this part of their businesses has begun to disappear at a rapid pace and the farmers are now slowly increasing their livestock to compensate. Supply per farmer amounts, on average, to 30 or 40 calves a year.
Jacques takes us to visit some of the farmers. In the hamlet of Le Moninie, right on the edge of the Dordogne River and in the shadows of the beautiful Château de Castel- naud, we meet Jean-Claude Sourzat, Pompon the bull and the 30 cows roaming in the field, all Limousins. Jean-Claude grows all of the grain and corn for the cattle and he keeps the calves in the cow shed on a layer of hay.

It is early evening and the cows make their way back to the shed in the same order as they do every day. In they go, straight to their own trusted spots and Jean-Claude relea- ses the calves to be with their mothers. They run in eagerly and guzzle from their mothers. If any of the cows are unable to produce enough milk, Jean-Claude assigns an auntie, and while the mothers and their children are occupied, he cleans out the pens and supplies fresh hay. When they have each had their fill, the cows move into another shed. The next day they will be allowed back in to see their children and then out into the field. Jean-Claude explains how looking after the animals and everything that goes with it is a full-time job, and that he has no time for holidays. “It’s not easy work to hand over to someone else and the relationship between the cows and the calves is impossible to explain. It’s passion.” The cow shed is antique and the doors are covered with plaquettes honouring his champion calves. “I’ll never take down the shed. The climate is perfect and we haven’t had a visit from the vet in three years.”
Limousins are easy cows to look after. They have little difficulty giving birth and manage it without any help. The newborn calf is then left with its mother for eight days in a separate part of the shed. Trader Jacques Laborie: “I buy the calves once they are about four and half months old.” He pinches a piece of fat next to the tail to judge if the calf is ready for slaughter. He prefers the meat from the heifers than from the bull calves.
They have better flavour and their meat is juicier. “Have a glass of Cahors with it and you won’t know what you’re tasting!” Jean-Claude pats one of the cows on the shoulder. “Béatrice is already eighteen years old and still manages to do what she’s supposed to do.

She’s a good mother and a good auntie.” 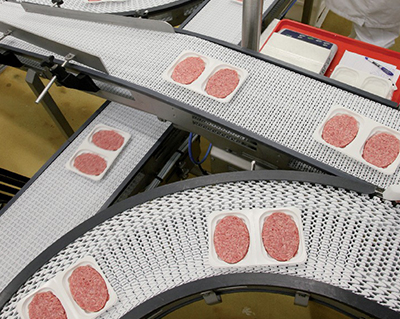 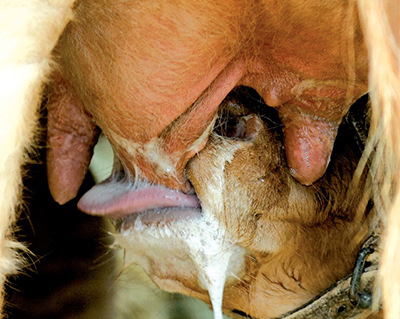 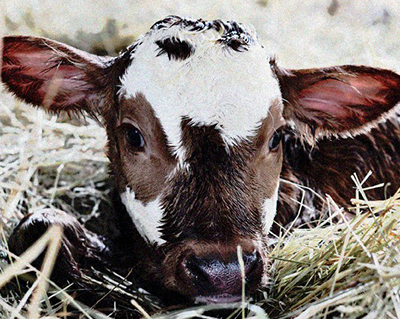